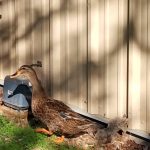 Cordelia Fire District crews performed a duck rescue operation when this curious little waterfowl fell into a drain pipe and couldn’t find its way out. The duck became trapped in a 6-foot drain pipe in a private reservoir pond off Rockville Road. The drain pipe has a 90 degree bend at the bottom with about a 150 foot pipe that empties into another area where the duck could escape. Unfortunately, the duck couldn’t see the escape route, and instead was trying to get back up the 6-foot vertical pipe, and wouldn’t move down to the connecting pipe to find the exit.

Cordelia Fire worked with the property owner to find a solution. To encourage the duck to move down the connecting pipe and out to freedom, the rescuers lowered a basketball into the pipe and then slowly flooded the pipe with water to gently nudge the duck along the escape route and out to safety.

Chief Dave Carpenter remarked that the duck was warmly greeted with a frenzy of quacking by the rest of the brood, who seemed genuinely concerned and grateful for their friend’s safe return.

On the evening of Tuesday, May 4, Cordelia Fire Protection District crews responded to reports of a fire on westbound Hwy 80 East of American Canyon. The incident started at about 18:00 as a vehicle fire, but quickly ignited nearby dry grass, causing a vegetation fire. With the hot and windy conditions and the fire growing quickly, two alarms were initially called. The Cordelia Fire crew was first on the scene.

Cordelia Fire District Chief Dave Carpenter reported that their crew of four firefighters did an excellent job fighting the fire, which grew to over 3 acres within just five to ten minutes. The crew split up, putting half the firefighters on the vehicle fire and the others on the vegetation fire. Because multiple crews were able to respond quickly, the fire was contained to just 3.7 acres. Cal Fire, Fairfield Fire, Suisun Fire District, American Canyon, and Vallejo Fire also responded to the incident.

Fire crews say this incident is an example of how fires can quickly spread with the combined dangerous conditions of extremely dry land and hot, windy weather. This is another reminder that fire season is already upon us, and that we all need to be aware of the dangers, remain vigilant, and make fire safety a priority.