Chief Dave Carpenter began his 30-year career with Contra Costa County Fire Protection District working predominantly in Concord, Martinez, and Antioch where he spent 15 years as a Captain, and then promoted to Battalion Chief in charge of the Training Division. He managed the District’s Fire Trail Program for 23 years operating heavy equipment including the District’s first Fire Attack Dozer. Chief Carpenter was awarded Firefighter of the Year and a Commendation Award from the Contra Costa Fire Commission in 2005. In 2008, Chief Carpenter received his Bachelor of Science degree from Grand Canyon University.

Chief Carpenter is excited to begin his new assignment as Cordelia’s Fire Chief. In addition to being highly visible in the public, he plans on addressing staff scheduling, salaries, and building the Resident Firefighter Program to appropriate levels. Chief Carpenter is involved with the Green Valley Fire Safe Council, and firmly believes our best fire safety and protection comes from working as a fire safe community.

The Carpenters reside in Green Valley and have two adult sons. One son is a Pleasant Hill physician, and the other is an A-10 pilot in the United States Air Force. They are the proud grandparents of five grandchildren. 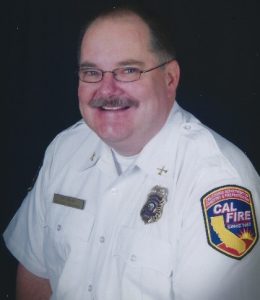 Chief Nolan moved on as a firefighter in the Federal Fire Service at Skaggs Island and Mare Island Fire Departments. In 1984, he joined CalFire which prompted a move to Riverside County. Several years later, he returned to Northern California as a fire apparatus Engineer and soon after was promoted to Captain, and later Battalion Chief in the San Mateo-Santa Cruz Unit.  There he served as a staff Chief in the Emergency Command Center (911 Dispatch), and Operations Chief for the Cal Fire/San Mateo County Fire Department until retirement. Chief Nolan continues to volunteer with the Cal Fire Benevolent Foundation.

Chief Nolan was born at Norton Air Force Base in San Bernardino County, he came to Fairfield as a child and graduated from Fairfield High School and he earned an Associates Degree in Fire Technology from Solano Community College.

Chief Nolan and his wife Karen, live in Vacaville and have two grown daughters, one of whom is a firefighter with Cal Fire.