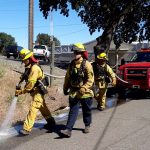 The District has grown its ranks in recent years, bringing on graduates of local fire academies as well as Emergency Medical Technicians (EMT’s) who wish to also train as firefighters. Since the majority of CFPD’s calls are for medical aid and other public assistance, the EMT component is critical for today’s firefighters. Additionally, as we enter fire season with most of the fire incidents involving wildland, CFPD implemented a new program offering EMT’s hands-on wildland fire fighting training. This expands the trainees’ career options while expanding the agency’s staffing abilities.

“As an autonomous agency, CFPD operates on a limited budget, and thus relies heavily on volunteer resident firefighters to carry out critical fire prevention and suppression duties as well as to deliver medical aid to our constituents,” Chief Carpenter said. “We’re grateful to all our volunteers for their service.”

“Our resident firefighters have successfully completed a fire academy and are training for a career position in the fire service. Our EMT recruits will be trained specifically in wildfire suppression. We are always training, both in the classroom and in the field. Those who join CFPD after graduating from an academy benefit from hands-on, real-world experience.”

Recruitment and consistent training is key to expanding the ranks at CFPD and enabling regular staffing of Station #29 on Rockville Road. Currently, Station #31 on Cordelia Road is staffed with one crew 24/7, and Station #29 is only staffed during times of high fire danger in the area. CFPD’s goal is to maintain 24/7 staffing at both stations, and to add crews especially in times of high fire danger. Full-time staffing of Station #29 will greatly improve response times for incidents in upper Green Valley.

Established in 1918, the Cordelia Fire Protection District is an agency that provides Fire and EMS service to the communities of Green Valley, Rockville, Cordelia, and Lower Suisun Valley. It is an autonomous District, governed by a five-member elected Board of Directors. The district has two stations covering 56 square miles of southern Solano County in California and is an active participant in local mutual and automatic-aid agreements with other agencies.